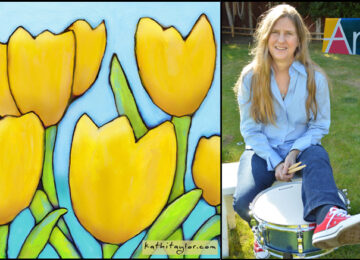 Kathi is an artist, surface designer, and creative entrepreneur living on beautiful Cape Cod, Massachusetts. She’s been a professional artist for over 30 years, expressing her love of color, beauty, and design using a variety of media, including digital art, scratchboard, painting, collage, mixed media, photography, and textiles. Whether creating fine art pieces or more whimsical work, she always pursues quality and an honest expression of her joy in creating.

Kathi has successfully sold her art and prints over the years, but had always dreamed of seeing her designs on everyday products. Six years ago she started KatCo Creations to turn this dream into a reality. She has created a unique line of coastal themed home goods, apparel and accessories and sells these products at local events, wholesale to boutique stores, and she also recently launched her own KatCo Creations online store.

In addition to creating her own products, Kathi loves working with others and welcomes collaboration and licensing opportunities.

Kathi’s art career began as an apprentice and then master printer in one of Los Angeles’ foremost printmaking and etching studios in the 1980s. This supportive, creative environment and her working relationship with some of Southern California’s most successful artists inspired her to pursue her own art. In addition to being a master fine art printmaker, she has had exclusive contracts for her abstract work, collaboration partnerships with art dealers and distributors, exhibitions in numerous shows, and the opportunity to run a successful art gallery.

A graduate of UCLA with a degree in history and French, Kathi is also an accomplished drummer and singer with a degree in percussion from the Grove School of Music. She has successfully managed dual careers in art and music for many years. She performs regularly with her husband – guitarist, singer, songwriter Robert Emmet Dunlap. Her music Bio follows.

Kathi’s latest music group is called The Songbirds, and includes three of her very talented singer/songwriter friends. They perform favorite songs and originals in the round, taking turns singing and harmonizing. So much fun! Find them performing around the Cape Cod area.

Kathi’s music career began in Los Angeles in the 1980s. She played drums with several local rock bands before joining up with The Mustangs, an all-girl, country rock group with strong songwriters and a big vocal sound. The band was together for several years, performing regularly on the L.A. country roots scene, including frequent appearances at the legendary Palomino club. They showcased with the top acts at the time including Lucinda Williams, Jim Lauderdale, Jeffrey Steele, and Rosie Flores.

During their years together, The Mustangs did several recordings, performed in Vegas and on network TV, were nominated “Vocal Group of the Year” by the California Country Music Association, and played at the famous South by Southwest event in Austin, Texas. While in Austin, they were featured performers at the Jimmy Dale Gilmore and Friends show where they shared the stage with Joe Ely, Butch Hancock and Lucinda Williams. The Mustangs also had successful European tours including performances at The Powerhaus in London and the famous Roskilde Festival in Denmark where they opened for Edie Brickell and the New Bohemians.

In addition to her west coast career with The Mustangs and as a successful freelance musician, Kathi was the regular drummer for legendary Cajun accordionist Joe Simien, and a frequent guest drummer for Lisa Haley and the Zydecats. She also performed for the crowned heads of Nashville with the band Way Out West, which earned them a development deal from Sony Records.

In 1998, Kathi relocated to Boston with her husband, Robert Emmet (Bob) Dunlap, a South Boston native and gifted musician. Since moving to the East coast, they have been involved with various music projects in Boston and now on Cape Cod including the release of Bob’s CD of original music, Notes from Home. Not only did Kathi provide the drums, percussion and backing vocals but she also painted the cover art and designed the CD package and website (www.robertemmetdunlap.com).

Recently, Kathi has been performing with The Songbirds, joining talented singer/songwriters Caroline Brennan, Catie Flynn, and Kathleen Healy in a casual song-in-the-round performance of favorite and original songs. She also performs regularly with her husband (RedKat Duet, Bob•Kat), and in the rocking trio, The Skiffs, with Sean Brennan. The Skiffs have been playing Tuesday nights at the popular O’Shea’s Olde Inne in West Dennis on Cape Cod for the past 13 years.

Kathi and Bob have performed Bob’s original music show, “Notes from Home”, including a live concert at Sandwich Town Hall that was captured and broadcast by Sandwich Community Television (SCTV). They have been performing a new show of traditional and original music, “Mick Ryan’s Lament: A Song in Three Acts” – An Irishman’s Journey from famine era Ireland to the American Civil War to Little Big Horn told through traditional and original songs and music”.  Mick Ryan’s Lament, the song that inspired this concert, was written by Robert Emmet Dunlap and has become a classic that has struck a chord with people worldwide. More information about their various music projects and a schedule of their upcoming shows can be found on Bob’s website.

When living in Boston, Kathi and Bob were the fifth and sixth members of the band Orpheus Reborn, which included four of the original members of the legendary 60s Boston band, Orpheus, who had the classic hit “Can’t Find the Time”. Kathi played percussion and drums in the band and contributed to the impressive six-part vocal sound. From the Orpheus Reborn website: “Her skills with a wide range of percussive devices and effect generators add variety and complexity to the group’s rhythm structure and instrumental melodic content, her clear alto expands and enhances the vocal arrangements, and her very presence helps to keep the group’s “rowdy side” in check. In addition to being a world-class musician that has toured internationally, Kathi is also an accomplished fine artist, and has lent these considerable talents to the creation of the group’s collateral material.”

As a Boston and Los Angeles freelance musician, Kathi has played a variety of musical styles – rock, blues, Cajun, Zydeco, country, jazz and Irish. When living in Boston, she was an in-demand drummer on the Somerville, MA roots music scene, both live and in the studio. Artists she performed with include the Radioactive Rustlers, the Patsy Hamel Band, the Tom Hagerty Band, Johnnie Mac, Attention Shoppers, Dig in the Dirt, Thea Hopkins, and Nashville singer/songwriter Teddy Larkin. Kathi recorded with several bands on the Song for Sally compilation CD – a collection of 13 bands who performed regularly at Sally O’Brien’s pub in Somerville. Other CD releases Kathi performed on include Bailed Out by Johnnie Mac and One Moment In Time by Patsy Hamel.

During her active L.A. art and music careers, Kathi attended the Grove School of Music in Van Nuys, CA and received a degree in drums and percussion. She also had the honor of studying drums privately for several years with Kay Carlson, a legend in her own right and a wonderful teacher, mentor and friend. Kay was an inspirational teacher to many aspiring and successful drummers in the Los Angeles area, and is loved and missed by many.

Thanks to Eric “The Snake” Gulliksen’s hard work, a discography of Kathi’s recordings, including sound clips, can be found on the Orpheus Reborn website.